Material: case with metal fittings made of precious woods; inside paper, lacquered softwood and metal.

Condition: in pristine condition for its age, no damage to the cylinder, all comb teeth intact. Original box key.

Johann Heinrich Heller is associated with the perfection of the music box in the 2nd half of the 19th century. As early as in the 1860s, Heller was the first to recognize the outstanding future that was to flourish for music box manufacturing in the following decades. His high-quality music boxes quickly became not only popular and expensive souvenirs that well-heeled tourists from the US, England or Germany brought back from their travels to Switzerland, but also luxurious must-haves for the upper echelons of society.

Heller was happy to adapt to the exquisite needs of his clientele. Thus, his clients could customize the equipment of their music boxes themselves from a specific selection of materials. In addition to the size of the music cylinder, which could hold more melodies the larger it was chosen, the design of the housing could also be personalized. Which melodies should the machine be able to play? What material should the cabinet be made of? With which fittings, inlays or monograms would you want to decorate it? And which of the 15 color lithographs to choose for the melody sheet?

The case of the music box offered here is made of precious woods with cherry and maple inlays. There are six melodies on the cylinder. 1.) Richard Wagner’s “Tannhäuser”, 2.) Johann Strauss’ “Ninetta” waltz, 3.) the Swiss home melody “Herz mein Herz, warum so traurig”, 4.) Eduard Strauss’ “Die Wienerin,” 5.) “Il Trovatore” from Verdi’s opera of the same name, and 6.) Josef Bayer’s “Bathing Gallop”. The balance marked with the manufacturer’s name ensures a constant speed of the music. Furthermore, the two lever settings on the right allow to select a single song or to play the whole reel.

Inside the lid the melody sheet is adhered on which the titles are handwritten. The listing is surrounded by historicizing vine work and flanked by two allegories of music. Around the two dancing female figures – one equipped with the tambourine and one with the aulos, the ancient double flute – coil banners on which the names of great composers can be read.

The design of the melody sheet provides important clues about the production period of this box. For example, J.H. Heller only began to mark his products with his name on the melody sheets from 1870 onwards. In addition, starting in the 1880s, he cooperated with Viennese printing house Habernal, which produced color lithographs like the one here for Heller with silver and gold medals in relief printing. The printer’s name is also noted on the lower margin of this sheet. In addition to these indications, the work number “11184” handwritten on the sheet finally allows us to narrow down the production date of the box to the 1890s.

An authentic, individual, and fully functional piece of music history, bringing the melodious and mellow tones of the 19th century into your own home! 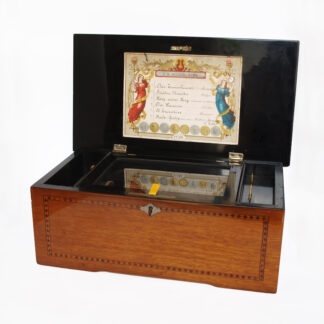