Just around the middle of the 19thcentury, this woman’s head was plastically carved out of the ochre lava rock in Italy and was later assembled to a brooch. A pretty, lively face is crowned with lush and rich vine leaves and grapes, interlacing with the long and wavy hair. Dressed like a goddess of Greek mythology, she personifies the joys of late summers, fertility and glee – a true devotee to Bacchus, the ancient god of fertility, wine and drunkenness, who was called Dionysus by the Romans.

Carving cameos from lava rock is a curiosity of the craft. Jewelry like this was predominantly produced in Naples and the area around Mount Vesuvius, bought as souvenirs by noblemen and other affluent travelers on their Grand Tour – an intellectually simulative trip of Europe when they had become of age.

This mineral consists of former magma leaking out of the volcano which then solidified to a volcanic rock. The structure and color of the lava rock depend on the pressure, the temperature, its chemical components as well as on the duration of the cooling process. This finely pored, ochre mineral was carved beautifully with elaborate details. The deep undercuts and delicate breaches create an almost three-dimensional woman’s head, lavishly decorated, peaking out of the flat background.

While the style of the carving dates back to the middle of the century, the drawstring setting in 14K yellow gold suggests a manufacture of the brooch at the turn of the century. 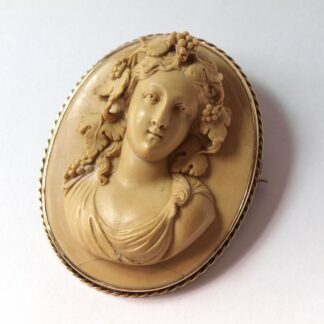