This band ring in 14 ct rose gold is adorned by a large, bezel set and vitrified head. Its shoulders are richly ornamented with a floral décor, while high quality cork carvings are glued under the glass, indicating an assembly of the ring around 1820/30.

It is a precious piece with mysterious imagery! Different objects translated to cork have finely been placed under the glass, which all allude to the liberal arts education, the septem artes liberals, emblematically bringing them together. On top a targe embellished with the head of the Egytian goddess Isis, or Hathor respectively, in her snake crown is carefully placed in the center, shielding the other objects from direct sight. A globe peeps out, most likely alluding to the art of astronomy. Also, Mercury’s caduceus entwined by two snakes as well as Apollo’s lyre are featured in the background. A few other objects like a palette and a scroll are placed behind the targe. Laurel leaves further enhances the ensemble.

Most likely this ring is an individual fraternity ring. An allusion to the liberal arts education is therefore plausible, since it was a prominently chosen attribute for young men in the time of Restoration of European monarchy after the Congress of Vienna (1815-1830) traditionally representing virtue and vigilance.

A very rare piece with a likely connection to a secret society, a gilt or a rite, which might originate from France.

The ring has most likely been altered in the past and does not feature any markings. 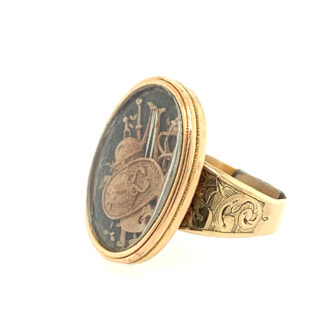