Condition: in good order, no damages, all stones are well set.

This piece of jewelry is a love ring of the early 20th century – the Belle Epoque. The narrow band is dominated by a round head, which has been designed as a target. It is to be interpreted as the target of love, at which Cupid aims at with his love dart. Target rings firstly appeared shortly after the turn of the century and remained very popular until the 1930s.

At around 1910, ladies grew tired of the floral, very feminine and almost elegiac style of Art Nouveau. With increasing self-esteem, they now strived for objectivity and lucidity that in the 1920s climaxed in Art Déco designs. Exactly at this time, just after 1910, this ring was assembled. It is manufactured in 18 ct. yellow gold (750/000). The head is centrally set with 11 brilliants in transition cuts that together weigh 0,4 ct of which the middle stone accounts for 0,2 ct. In color the diamonds are near colorless (H-I) and in standard of clarity they feature very small to small inclusions (VS1-SI1). A band of 21 sapphires in baguette cut surround the middle set of diamonds and complete the target shape. They are very well calibrated and exactly set en pave.

This ring is a finely executed gold work – band and setting were crafted by hand. To achieve a plain surface of gemstones is a formidable challenge for both lapidarist and stonesetter alike, which is very well executed in this piece. It is shipped in a jewel case. 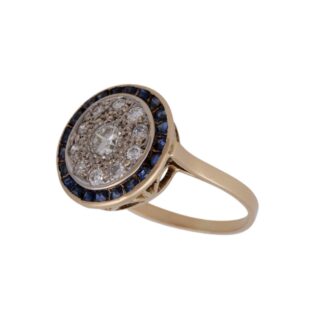