As the French fashion designer Christian Dior established his own couture house in 1946, he launched one year later his first collection “New Look”.

Aiming at offering women an outfit for every occasion, a total look each complete with accessories, down to the last details of hats, shoes, bags, stockings, perfumes and jewellery, Dior looked forward to get in contract with the Henkel & Grosse, Pforzheim. He had always understood the potential of „bijoux fantaisie“ resp. „costume jewelry“ to express femininity an the fleeting fashion mood of the movement, believing good taste to be more important than money.

In 50 year-old co-operation Christian Dior and his successor produced the jewellery collections at Henkel & Grosse in Pforzheim/Germany. The company was one of the most renowned enterprises for costume jewellery worldwide. In 1955, Henkel & Grosse signed a licensing agreement with Christian Dior. Than they had the exclusive production licence and were distributor for Diorjewellery.

The 1970s was inspired of the exotic jewelry of the Aztecs, Maya and tribal cultures, which led in the beginning of the decade to the so-called Cleopatra Style, imported by Liz Tayler in 1969. The special creations, like the one offered here, were designed for the fashion shows of the Haute Couture made from the house Dior. Soon they justified the timeless style of the classical, self-confident beauties in Hollywood.

Closely following the line of the neck, polycord, with his lock from hooks and eyes, in the neutral “used look”, has been manufactured after 1970, what its hallmark proved.
The choker will be sent in a adequate red velvet box. 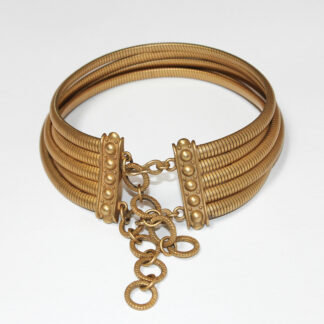