Heinrich Löffelhardt (1901-1979) ranks among the most important industrial designers in post-war Germany. Especially his designs in glass and porcelain for Zwiesel Crystal Glass and the Arzberg porcelain manufactory of the 1950s and 1960s influenced contemporary design vocabulary. Löffelhardt is considered an important advocate of the reform movement “gute form” (en. ‘good shape’) which gave utterance to the “Deutscher Werkbund” and its striving for a design that considered the manufacture and materials. With the “gute form” German post-war designers aimed at a factual and contemporary vocabulary which regarded the ecological, economic, social and cultural parameters of the industrial society as paramount and stood in the tradition of the Arts & Crafts reform movement, the Deutscher Werkbund, Bauhaus and the Ulmer Schule.

With his smooth cylindric, round and conic shapes, Löffelhardt translated these maxims into his own designs which he since 1954 applied for Jena Glass in Mainz and its subsidiary Zwiesel and at the same time at the porcelain manufactories in Arzberg and Schönwald. Responding to the ponderousness of pre-war designs, Löffelhardt implemented a new sense for an elegant and timeless buoyancy.

As artistic adviser he worked for Zwiesel until 1977. The glass series “Florida” which he designed in cooperation with the artistic studio of the manufactory showcased the principles of the “gute form” for a last time before a nostalgic sense largely dominated the designs of the 1970s. Apart from the sweeping shapes of the “Florida” series, the décor of imbedded and vortically ascending bubbles is distinctive in every piece, awarding a certain magic also to the vase offered here. 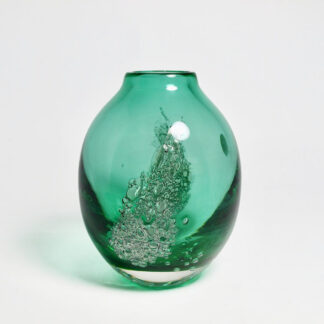