The history of the major Glasfachschulen in Steinschönau (Kamenický Šenov) and Haida (Nový Bor) goes back to the 19th century. Big refineries for crystal glass, like the here named of Friedrich Pietsch in Steinschönau, covered their designs for the discerning artistcrystall from there. The technically-oriented characteristics of the glass in the area of Haida-Steinschönau were the processing in cold state, that is to say, the decorations made on raw glass, like enamel and painting with “Schwarzlot”, diffusion color, sharpening and cut.

In the first decade of the 20th century the possibilities for craftsmen from northern Bohemia century succeeded in developing an own style with combining geometric ornaments or stylized fowerdecors in transparent glass which took over elements of Vienna modernty in the style of Biedermeier and modern alignment. In Steinschonau, the acquisition of elements of Art Deco style already begun from 1915 on – as this piece is able to make clear. With the decisive impetus in the direction of modernity the schools succeeded in keeping the connection to the international development in glass. 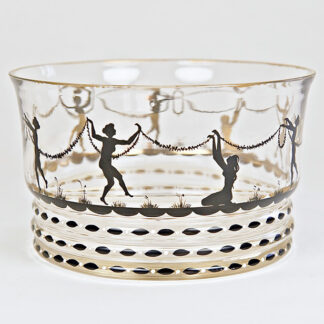