In good condition, minimal scratches of use according to its age.

Curved, with oval thickening on the lever, oval blanking cover.

From Art Nouveau to today, many of the best architects do not missed the opportunity to design for the new house also a new lever handle. In 1915 the German Werkbund published drafts from the German architect Peter Behrens (1868-1940) for the famous bronze foundry S.A. Loevy in Berlin. One of them is the here offered, which was also highlighted the same year in the journal „Die Kunst“.

Since 1907 Behrens was the artistic director of AEG and he is considered as the first industrial designer.  His employment coincided with the establishment of the German Werkbund and is considered as a turning point in German design history; it was the first time a major international company had employed a single designer to advise on all aspects of its corporate identity, accommodation and output.

From 1900 on, the bronze foundry S.A. Loevy took part regularly at major international events, so 1900 and 1904 at the world exhibitions in Paris and St. Louis and 1902 at the international applied arts exhibition in Turin. In 1910 began the close co-operation to Peter Behrens. After the first world war Loewy awarded assignments to Erich Mendelssohn, Mies van der Rohe, Wilhelm Wagenfeld and Walter Gropius, whose lever handle from  1922 is today the prime example of modern industrial design. 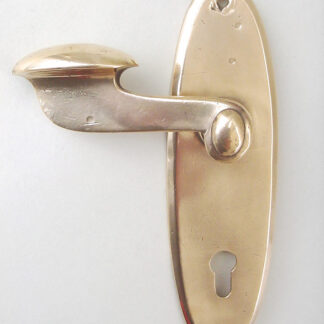