Black Celluloid, cast and carved, the Ornament of the comb is built up circular in three stages, in the middle a purple Carbochon, with five tines, in the nature of a “mantilla” comb.

In very good condition, no cracks, no discoloration.

Auguste Bonaz (1877-1922) took over the familiy hair ornament business from his father, César, who spezialized in carved horn combs. In contrast to his father, since 1910 Auguste used no longer Horn, but Celluloid and also Galalith.

Noteworthy for today is, how extravagant, in the manner of jewellery, these technical and hand-made accessories are. Especially celluloid was like no other material suitable, first to cast and later to cut the fine lines and filigree breakthroughs in the present quality and stability.

Bonaz had impressive haircombs around 1920. His spectacular, signed creations were elaborately worked, in most modern geometric shapes. The eclectic ornamentation was past, Bonaz haircombs mediated the new attitude of the modernity.

His artistic compositions, as well his craft skills in dealing with the plastics provided the Art Déco an eloquent example, already before and even long after the famous exhibition „Exposition Internationale des Arts Décoratifs et Industriels Modernes” in Paris in the year 1925. In the 1920s and 1930s plastics were the revolutionary material of the avant-garde. The same geometrical lines, which seemed to require an Art Déco design, the plastic called.

The Maison Bonaz had on this exhibition with haircombs of Auguste Bonaz his greatest successes. His wife Marguerite Bailly had continued the business in Paris, five years after Bonaz death in 1922. 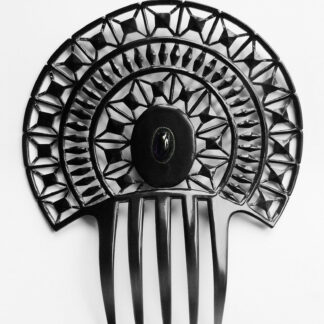