Condition: The offered banknotes were used and show the typical tracks of the use of their age. In all they are in good condition. No breaks.

All the notes are watermark. Offered here notes of the series A to Z, issued 1923 between the 10th of August and 5th of October. All colours all different.

PRICE FOR SINGLE BANKNOTE!
Please send an email and ask for certain serial numbers and colours.

Just 23 years old, Herbert Bayer was called to design a series of Notgeld for Thuringia in Weimar, a liberal stronghold and then capital of Germany. It was the 8th of August in the year 1923. Virtually overnight, he realize a compelling, functional concept in the programmatic ideas of the Bauhaus.

He was a painter and currently a so called “youngmaster” of the famous Bauhaus in Weimar. From 1925 on he led his own workshop at the Bauhaus Dessau: typography and advertisement.

The famous “Bauhausausstellung” was forthcoming in the year 1923 between Juli and September and was crucial to clarify the identity and the objectives of the Bauhaus. The “Notgeld” ist the first testimony to the famous change in the Bauhaus, when Walter Gropius expose the slogan “art and technology” a new unit, a new orientation from craft to a technical base.

The influence of the dutch De Stijl-movement is clearly recognized in the draft. These ideas were decisively spread by the artist, provocateur and theorist Theo van Doesburg in Weimar between 1921 and 1923. Bayer uses the De Stijl-typical, strong colours and basic forms, with symmetry and asymmetry. He arranges clearly defined rectangular areas, horizontally and vertically, using just one colour a sequence. He has managed a draft dividing values and series, just as outstanding as modern. This will become particularly clear if you look at the smooth and dark colour range and the imagery which was in use generally: insignia and emblems, or historical topics, squiggly, old German scripture, emotional ideas of the great masses – formulas to strengthen the community – seeds of blood-and-soil-ideology.

Initially Kandinsky thought it would be useful to isolate the coulors and later to consider them in the context with others. In addition to the investigation of the “internal sound“ of the individual colours, he started in his lessons an in-depth study of the relations between them. He did systematic studies showed how the colours depend on size and colour change (1911-14).

Bayer seems to invite his audience, as well Kandinsky did it, he spread out the sound of individual colours, as in conjunction with others.

The circulation of the notes, swiftly and in large quantities rallied support for methods and ideas of the school. They pleaded for innovation rather than withdrawal, for artistic ethos instead an empty pathos.

With these note Herbert Bayer already showed his great potential. He became one of the leading and internationally renowned typographers of the century.
A real piece of Bauhaus design! 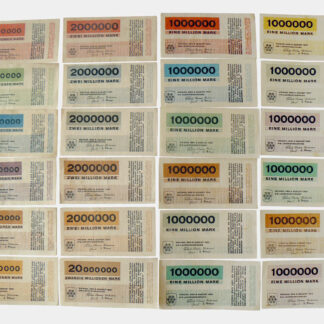