State: The offered banknotes were used and show the typical tracks of the use of their age. In all they are in good condition.

Price refers to one banknote.

Just 23 years old, Herbert Bayer was called upon to design a series of Notgeld for Thuringia, a liberal stronghold and then capital of Germany. It was the 8th of August in the year 1923. Virtually overnight, he realize a compelling, functional concept in the programmatic ideas of the Bauhaus.
He was a painter and currently a so called “youngmaster” of the famous Bauhaus in Weimar. From 1925 on he led his own workshop at the Bauhaus Dessau: typography and advertisement.

The famous “Bauhausausstellung” was forthcoming in the year 1923 between Juli and September and was crucial to clarify the identity and the objectives of the Bauhaus. The “Notgeld” is the first testimony to the famous change in the Bauhaus, when Walter Gropius expose the slogan “art and technology” a new unit, a new orientation from craft to a technical base.

The “Hundred-million”- notes are a continuation of the smaller “Million”-notes. The Milliard notes followed those.
Bayer has managed a draft dividing values and series, just as outstanding as modern.

Bayer seems to invite his audience, like Kandinsky did. He spread out the sound of individual colours, as in conjunction with others.

The circulation of the notes, swiftly and in large quantities rallied support for methods and ideas of the school. They pleaded for innovation rather than withdrawal, for artistic ethos instead an empty pathos.
With these notes Herbert Bayer already showed his great potential. He became one of the leading and internationally renowned typographers of the century.
A real piece of Bauhaus design! 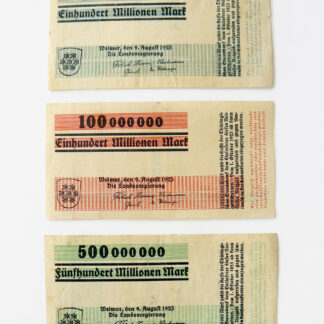