Condition: without chips, slight scratches in the glaze on the forehead, cheek and neck.

The ceramic wall mask is an autonomous art form in its own right, it is both new and not directly modelled on recognisable prototypes.

From the mid-1950s at the latest, all reputable ceramic firms felt constrained to include wall masks in their product range which propagated the ‘new’ modern image of the woman. As role models and inspiration for artists served the ‘beauties’ of the day, like Marilyn Monroe, Josephine Baker, Romy Schneider or Conny Froboess.

The typical wall masks in the first years represent a young woman with long hair, tied up in a ponytail, with lush red lips and wearing a turquoise blue necklace or scarf. The colour blue was designated the colour of fidelity and the book „Schön sein – Schön bleiben“, which was published in 1955, reduced all the publications of the day to a common denominator: ‘The uncomplicated, mature, lively woman should have a preference for blue; the blue of the robes of a madonna lets some blonde appear as angels. Whether it is really her…?’

The Cortendorf wall masks designed by Albert Strunz – like this model with the no. 3440, which belongs to the first wave of his wall masks – represent innovation in both form and content. As for form, he consistently rejected vertical symmetry and frontality. A transition from half to three-quarters and full profile can be traced. 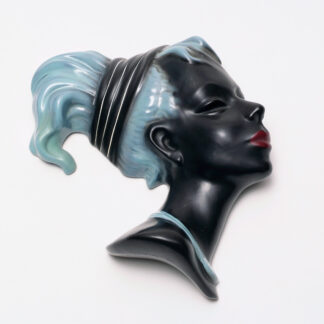