Condition: in perfect condition, no chips, no scratches.

In the autumn 1950, the Rosenthal AG introduces the orchid-jug 2592 drafted by Fritz Heidenreich. The vase attained extraordinary popularity under the name „Schwangere Luise“ (“enceinte Luise”) taken over from the workers at Rosenthal. This vase caused an intensively led symmetry-asymmetry-discussion.

Not only, that a new form-idea for ceramics was born, it placed also a signal of the liberation of the ideological ballast and led exactly in the “The German Economic Miracle“.
The bulbous form helped to confirm the regained affluence and especially the popular “longing” seladon-green (named after the matt-green garment of the shepherd Seladon) attested, that the own apartment turned into a place of retreat.

The success of this vase and also this in the same year from Fritz Heidenreich drafted “vase with the seven faces” induced the Rosenthal AG in the following years to a strong expansion of the offer of asymmetrical objects. 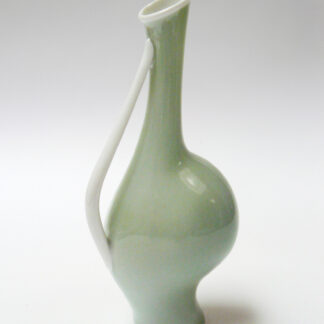