In best condition, no tracks of use, no discolouration.

Until 1989 the office was the centralist management tool of the SED. It ranked among the world’s largest public institutions for design. In his nearly 40-year-history, the institution had profound transformations. In the beginning the main tasks existed in designing and advertising big industrial companies in all ranges, but the most interesting material in the fifties was plastic. It was an open and virtually unaffected field for modern design.

The director of the “Institute for Applied Art” was Walter Heisig, between 1953 and 1962. He was following the party-line and granted only a few experiments in the sense of the strict functionalism. But these were as rare as they were impressive.
Among them were two plastic sets, which have been selected for the East German merchandise book “Form and Decoration” published in 1955-61.

Undoubtedly, the camping utensils designed by Hans Merz and the coffee set by Martin Kelm were a convincing plea for Bauhaus and Werkbund, for compelling designs like those from Christian Dell und Friedrich Adler, for new resins after Bakelite in the end of the twenties.

Both drafts didn’t convince by their aestheticising design, but by their solid materiality, processing, and by their consistently functional shapes confirming in the compact, closed models, in smooth surfaces, rounded solutions for corners and intersections.

Outstanding and significant in the history of modern german design is the storage set of Hans Merz. Milk jug, sugar bowl, cups and plates can be completely stacked in the conical jug. In 1959 Hans Merz was awarded with a gold medal for his camping utensils.

For Hans Merz (born 1921 in Dessau, died 1987 in Halle/Saale) himself, this crockery belonged to his own standard setting practical works.
Afters his studies at the „Hochschule für bildende und angewandte Kunst“ in Berlin und his work for the „Staatl. Porzellan-Manufaktur Meißen“ he came as the artistic fellow in the department devices, apparatus, machines, than as a department manager to the „Institute for Applied Art“. From 1966 on Hans Merz took essential influence on training designers at the Burg Giebichenstein/Halle. 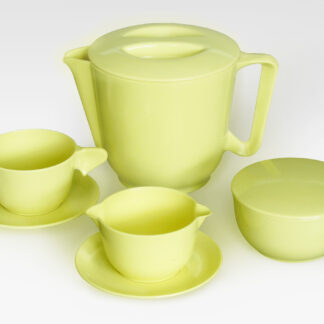