This bracelet is composed of four slightly arched plaques of silver-plated tombac with polychrome opaque cold enamelling with silver coloured edging and bands in cloisonné technique. The colours each rectangle are yellow, orange and red. They alternate in the fond and circles. The connecting pieces and clasp are also made up of silver-plated tombac. Black enamel on the reverse.

Perli Pearl Industries of Schwäbisch Gmünd was founded in the early twenties by Martha May and specialized in the manufacturing of glass-pearl costume jewellery. In 1937 the firm won a silver medal at the Paris Exposition. Two years later, it reached its maximum size, employing over 100 workers. In addition to wood, glass, and porcelain beads, Perli’s production also included objects made from pewter or silver. From 1935 on, they also made enamelled ornaments which were later to become their specialty.

The metal bracelets let the old and new technologies of the enamels and the design with rich colour-contrasts and geometrical figures of the twenties and thirties with an easily changed colour-scale revive.

Comparable works came from the Karl Schibenski, Kollmar & Jourdan in Pforzheim and A.G. Bunge in München. 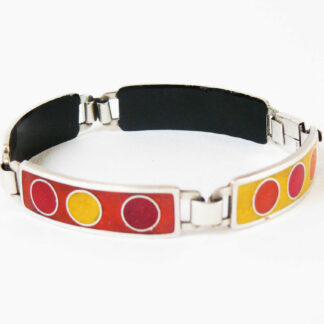