‘The vase with seven faces’, Fritz Heidenreich, 1950 for Rosenthal, Germany

In 1950 the economic and political circumstances in Germany had consolidated gradually and the people began to long for individual extravaganzas.

In this year Fritz Heidenreich drafted for Rosenthal the first new form-ideas: „The vase with seven faces“ and the orchid-jug „Enceinte Luise“. With that the porcelain-factory Rosenthal took over the expression “New Look” with it for its new porcelain-assortment. The success of this vase and also of „Schwangere Luise“ (transl.here “pregnant luise”, cp.offer) in the same year, the business induced to a strong expansion of the offer of asymmetrical objects.

In consequence, the new stylistic tendencies of ceramic forms and decors virtually had settled in all important manufacturers. Rosenthal was the pacemaker for it. One insisted on the exclusivity of the own designs and tried to push through this claim lawfully. The firm celebrated designer-cult already in this time.

First middle of the 60th a decline of these broadly revolutionary forms and decors becomes recognizably.

Be the first to review “‘The vase with seven faces’, Fritz Heidenreich, 1950 for Rosenthal, Germany” Cancel reply 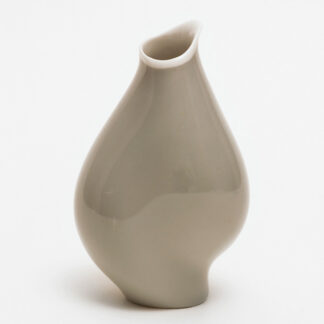