With a speech of the director of the “Institute for Applied Arts”, Walter Heisig.

Binding in good state. Cover with tracks of use.

In 1950 the Dutch architect and designer Mart Stam founded – as director of the “University of Applied Arts” in Berlin-Weißensee – the “Institute for Industrial Design”, located in Berlin-Mitte, Clara-Zetkin-Straße 28. It was the function of the Institute, to achieve a “qualification of industrial produced products and thus to raise the general cultural level” (Mart Stam, August 1950).

It goes on to say: „The institute is to see as the central point for research and evaluation of development work on the one hand, and on the other hand promotioj and coordination of design, … .”

In order to reach a widespread impact, at the institute should be implemented a ” photo archive”, a “collection of samples outstanding German industrial products” and such from the “Soviet Union and the eastern democratic countries” as well as a “catalogue of design” should be issued.

In the consequence the results of the in-house design was documented since 1953.

In 1952 the institute was assumed to the State Commission for Cultural Affairs Councils, from 1953 the Ministry of Culture, than renamed in “Institute for Applied Art”. The new director was the graphic designer Walter Heisig.

Be the first to review “Institute for Applied Art, 1953, GDR” Cancel reply 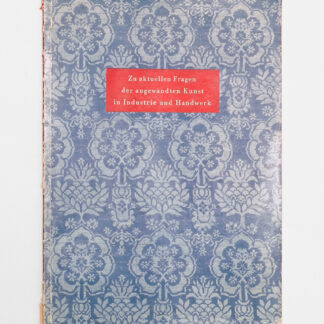