Automobiles and the needed infrastructure enchanted the masses after World War II. Particularly in the 1950s and 1960s, cars grew to an everyday phenomenon, which was followed by innovative architecture and, in Europe especially, grand multistory car parks were directly integrated in urban structure. It is exactly this enthusiasm and excitement for cars and traffic that this tin toy amusingly incorporates – making children happy and adults as well.

Traffic pulsates in the modern and quaint panorama. Nose to tail drive road cruisers of the time, a train speeds over the background bridge and a helicopter circuits overhead. In front of the scene the two little tin cars bustle about. At full pace they speed out of the urban backdrop and just bounce back in while moving between the levels, laying on lots of fun watching the scene.

About the mechanics of the toy: by winding up the toy on the backside, the upper level of the car park starts rotating.  Thereby, it can pick up the tin cars and drop them to the lower level. Because of the downward slope the cars then drive back to the other end where they are picked up once more. The circuit closes by the cars automatically changing between the levels until the winder stops. The rotation can be manually intermitted through a keeper on the left end of the upper level. 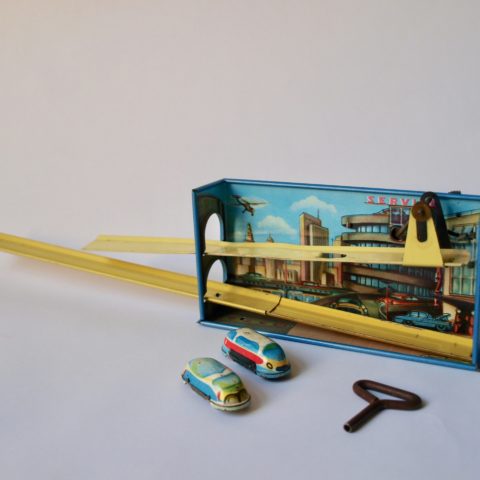