Detailed representation of a dainty, but adults jack or piglet, gesticulating, in the expressive lunge, supported by his ring-tail, with corked champagne bottle, labled: Champagner Grand Brut, cylinder at an angle, the back has a stylised hole, in which the character can also hang up. Here offered small “bronze” is an alloy of copper and tin. Only yellow brass-copper and bronze compositions were regarded als real “Vienna Bronzes“, not thoses made of iron, tin, zinc or lead.

During the last centuries Vienna’s arts and crafts have enjoyed high esteem all over Europe. The small bronze miniatures emerged in the middle of the 19 th century because of the new mechanical processes and could insert in this tradition. Later they became world famous as “Vienna Bronzes”.

The production of the small bronze figures was originally inspired by French artisans. Mathias Bermann, originally producing metal decorations for pipes, started around 1850 to mould, to chase and to colour animal figures and was soon followed by many other artisans. Bermans business was the birth of the popular works in request. The original company which produced theses bronzes stayed in the Bermann family for a long time. Mathias Bermann’s son Franz started to produce models in art nouveau style in the late 19th century. When Fritz Bermann took possession of the business in 1927 he expand his commerce by offering different designs and more skilful handicraft.

Particularly with „Vienna Bronzes“ is the fact that they have been worked out in an extremely loving way with ultimate artistic accuracy. Vienna Bronzes figures were produced in small series, but each piece seems to be a unique object. Only the casting is common. By having been chased and coloured by hand in different sequences each becomes an original object. 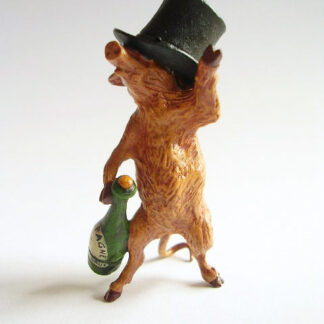