Condition: no tracks of use.

This stack-ashtray in the rack was a limited Christmas-offering. On the market it was available only in the carton with gray smoked coloured peels.

The Mainz glass-work enterprise “Jenaer Glas Schott &Gen.“ started in the year 1952. An overwork of the household-glasses which Wilhelm Wagenfeld had developed for the Jena glass-work was necessary after the war. The onward rationalization of the modern glass-industry and the reorientation on western markets put new requests for the formal formation. Erich Schott engaged from 1954 on Heinrich Löffelhardt, Wagenfelds closed co-worker at the United Lausitzer glass-works (Vereinigte Lausitzer Glaswerke, VLG).

For the VLG, Wagenfeld had drafted 1937/8 a row of stack-ashtrays, which Löffelhardt took up in Mainz again and overworked these in his creative total-concept. Characteristic mark of the production was the simple form, marked as “round-angular”. It corresponded practical use-requests and required new technical solutions.

Aesthetics and functionality of the “good form” of the 50s years manifest themselves exemplary at this piece. If Löffelhardt took over also the hollow-shaped storage space so the forms now slide playing and firmly in one another in contrast to the model. The open wire-rack reshape the stack annular and secures the peels sufficient. „One could go to shop with it, so well this sits“, emphasize his biographer Dr. C.Burschel.

From 1954, Löffelhardt was distinguished nationally and internationally for his creative work virtually annually. The “Rat für Formgebung” was responsible for the West German contributions on the Milan Triennalen. Gold-medals and a Grandprix returned with Löffelhardt design. In 1957, Löffelhardt was distinguished with a gold-medal on the Triennale in Venice for his artistic total-work. His place in the design-history of this 20. century is incontestable. 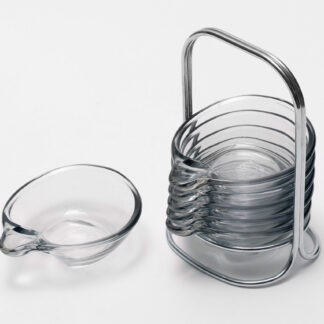