Perfect state. All parts original. No tracks of use.

The fireproofed utility glass has been produced and distributed since the 1920th in Jena under the brand name “JENAer GLAS”. After the expropriation of the headquarter in Jena, Erich Schott set up a new one in Mainz. Because the name “JENAer GLAS” had been successfully indroduced, it accomponys the factory still to Mainz. For decades, therefore “Jenaer Glas” came from Mainz, while at the same time “Saale glass” was produced in Jena.

From 1954 on Heinrich Löffelhardt was given the responsibility for the design of the “JENAer Glaswerke Schott & Gen. in Mainz” and its subsidiary the „Vereinigten Glaswerke in Zwiesel“.

In the 1950th Löffelhardt was already successfully working for the porcelain manufacturer Arzberg and Schönwald. As an assistant of Wilhelm Wagenfeld in the workshop of the Vereinigten Lausitzer Glaswerke VLG (1937-41) and as a designer for Gral-Glas in Göppingen he could references on solid experiences in the glass industry.

The here offered milk and sugar set is based on a model, that Wilhelm Wagenfeld had designed from 1931 on for Jenaer Glas Schott & Gen..
Because Wagenfelds design had hidden some time-limited problems for a long time, Erich Schott intrusted Heinrich Löffelhardt with the redesign of this set.

In 1955 he found for the delicate cream- and sugarbowls a pure conical, stable and timeless form. In its strict elegance they are unmistakably products of the post-war period, of the ideal of the “form without ornament”. They took Wilhelm Wagenfelds warning to the heart, that the „Dinge um uns“ (1946, translated here: the things around us) should be the undemanding.

This little set provides a significant example for the solidarity to the Bauhaus. It represents the concept of the “good form” of the “German Werkbund” and the “Rat für Formgebung” as an ambassador of a young democracy to the world.

Already in 1957 it was honoured on the XI. Triennale in Milan with the golden medal. Three years later on the XII. Triennale Löffelhardt received the highest award, the Grand Prix.

Löffelhardts design exceeded his model in its elegance, and is until today still unmatched by subsequent versions, which has been drafted for example by Ilse Decho (1962/3) or by Hans Merz (1978). The entitlement to theirs designs changed over free artistic designs to inducement by the university up to the determination by the export.

In contrast to Wagenfelds set Löffelhardts is Not offered as a reedition. This here in volume and best condition offered set, which also includes the vinous widely used coffee cups, is an original of its time in best available state.

Be the first to review “Set for milk and sugar, Heinrich Löffelhardt, 1955 for Jenaer Glas Schott & Gen.” Cancel reply 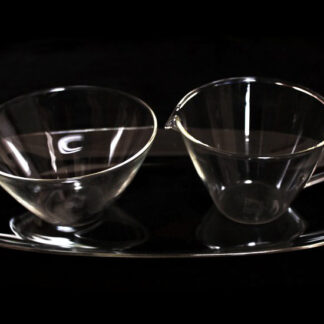