Bowl with cover and 5 cups in very good condition with tiny scratches, no breaks, without tracks of use.

Wilhelm Wagenfeld, perhaps the most significant German industrial designer after Peter Behrens, was a designer with visions. For him the industrialization and the mass production meant an opportunity to establish a classless society, at least as far as it concerned the taste. Things he wanted to design, „every bit as nice and convenient that the richest wishes to own it, and so cheap, that also the poorest can buy it“ (1946). His immortal, timeless creations from simple things of daily use, dominated and influenced the design of the 20th century.

The Punchset is one of those distinctive products of the post-war era, committed to the ideal of the “form without ornament” from the 1920s, and after the war perceived as a new cultural property of a young democracy.

For the Buchsteiner company Wagenfeld designed more than 20 drafts between 1955 to 1958 – although not all of these were to run. Nowadays the punchset belongs to the classics in modern design museums. His tempting, more straightforward, but ergonomic and functional well thought-out design made him a popular commodity, a silent helper, which the attentive owners have been kept far beyond its production time. The set is good to store, it is light, and due to its transparency, it can be easily completed with glasses and a wide range of accessories. The scoop is to lead well, the ergonomic handle fits in the palm, die ladle seizes a good proportion and can easily be poured. The only disadvantage was the material itself. Acrylic glasses get scratches und shabby after some time. Simultaneously, the affordable and durable products made of Cromagan emerged. The here offered set just have minimal tracks of use. The original labels are intact. It was kept over half a century with care – this is the best proof of its appreciation. 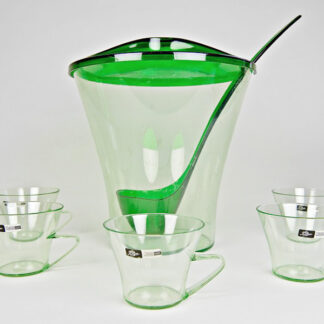