Condition: In very good vintage condition. Little chips on inner edge of lid, not visible when the box is closed, slight yellowish discoloration on the side.

Eduard Fornells Marco (1887-1942) is among the pioneers of the early plastic designs. Born in Barcelona, he graduated there a trainee as a metal engraver and woodcarver until 1903.

In 1909 he moved to Paris and sought contact to other artists. 1911 he met the glass-sculptor René Lalique (1860-1945). From this year on he became a partner of him, inventing moulds and engravings. 1919 he started a small factory specialised in artistic items made of aluminium and moulds for resins. First he used Baekelands “Bakelit” (invented 1909) and then the new plastic “urea formaldehyde” (UF), which was introduced 1924 for the first time at the Great Exhibition of the British Empire in Wembley, well known with the trademarks “Beetle“ and “Bandalasta”. Cp. the objects offered on this webside.

His jewellery- and beauty cases were noble and valuable, so that they have been shown on the „Exposition des Arts Décoratifs et Techniques Modernes“ in Paris 1925.

In those years Fornells traveled specifically to England to see new applications and manufacturing processes. The results convinced him, to supported the French plastics producers „Poulenc Frères“ (later „Chemical Factories of Rhône”) in the development of new compressions.

A few years later he mixed the resin with bleached Cellulose for a relatively pure white. This mixture became famous in England under the name “Plaskon” from 1930 on.

An early example of this new mixture is the here offered beauty case, named “daffodils”.
The brightness of the white and the delicacy of the compression ahead everything so far offered.
Well, the relief was post-processed manually but the meticulosity is in the history of plastics incomparably. His shape is with refine deep carving on top of the lid, figuring stylized leaves and flowers. Each piece is a well-measured composition of shape, colour and technical capacity.
For his work Fornells got a gold medal on the „Exposition Internationale des Arts et Techniques dans la Vie Moderne“ 1937 in Paris. 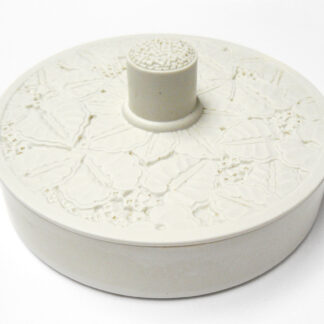