State: in all very good. All parts original. No defects. Full lacquer. Normal tracks of use related to the age.

The here offered telephone is the original model of 1928! This execution is illustrated in the “Frankfurter Register” (Frankfurt registry).
It was drafted for the homes project „New Frankfurt” (1925–1930). The production of the phone with a receiver made of Bakelite and a metal corpus was continued during the 30th, but in slight different versions – with a different shaped receiver, with a dial made of plastic or plastic cable.

The „New Frankfurt” was a housing program, which should eliminate the acute housing shortage in Frankfurt/Main after World War I.
From the outset the German Werkbund and the Bauhaus were personally involved in the project. The „New Frankfurt” is a significant example of classical modernism and functionalism, as in architecture and design were characteristic after 1920. Put on standardization and put much emphasis on the aesthetic preparation. High conveniences came together with relatively low cost.
The apartments were fitted with this telephone modells. They have been also equipped with the famous “Frankfurter Küche” (Frankfurt kitchen), designed by Margarete Schütte-Lihotzky, the first built-in kitchen ever. Basically all parts were standardized and mostly produced in urban workshops.
This telephone provides with documentary evidence, like no other example, the Status Quo of the Bauhaus Dessau.
The rotatable dial was placed into a simple, quite rationalized box made of pressing tin. In fact, the reference of the Bauhaus to the plastic technology was quite selective.
Just the receiver was mold in Bakelite. Compared to the standarizised phone of the German Reichspost – the W28 produced by Siemens & Halske – which was edited the same year, this telephone attests more ergonomically thinking. The main argument was not a streamlined symmetrical design. One side, there where the cable is, was formed in a straight line. It lies down perfectly on shoulder and chest.

In the years 1928 to 1931 the „Frankfurter Register” (Frankfurt registry) compiled some few usage objects and furnishings – including this telephone.
This registry was composed of 14 single pages. They were added to the activistic magazine „Das Neue Frankfurt”. The magazine focused international trends of the new building, but also the renewal of art, housing and education. Each time the supplement presented exemplary design for industrial production.
In 1929 the 6th supplement provides the here offered telephone. All objects were illustrated, the manufacturer was named, and in addition it often contains details of the used material, dimensions and prices. Employees, readers, manufacturers and retailers have been invited to take part to the creation of this registry.
The idea of listing recommended objects for mass production was in the tradition of the German Werkbund. They edited already the “Deutsches Warenbuch” (translated here: german schedule of commodities) in 1915, which was still in circulation, but it needed to be expanded. 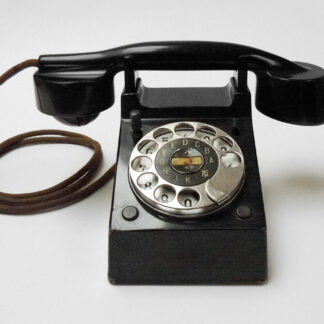