Condition: enamel in very good state, cleaned, not restored; colors completely preserved, not faded, without bubbles, a few scratches, damage to edge and corner and on the surface through fire and bullets, suspension only to three points possible.

The Dürerbund-Werkbund-cooperative (Dürerbund-Werkbund-Genossenschaft) started for the first time the systematic and organised dissemination of high quality articles „Made Germany“. The purchaser’s association founded in 1913 and was connected to the non-profit salesplace for German qualityin Dresden-Hellerau, the „Gemeinnützige Vertriebsstelle für Deutsche Qualitätsarbeit, GmbH“. About this cooperative and salesplace drew a close-knit network of personalities from the Deutscher Werkbund and Dürerbund. To the best-known supporters and advisers of this initiative belonged a.o. Hermann Muthesius, Karl Schmidt, founder of the „Deutschen Werkstätten“ in former times „Dresdner Werkstätten für Handwerkskunst“, Friedrich Naumann, Karl Ernst Osthaus, Peter Behrens, Richard Riemerschmid and Ferdinand Avenarius. The list of those, who took part in the promotion of Dürerbund-Werkbund-cooperative can be read like a “Who’s Who” of all German reformers, who was involved in the order and departures of art and industry at the beginning of the 20th century.

Around 1910, Dresden, especially Dresden-Hellerau, as the first German garden city, was the meeting place of the artistic avant-garde in Germany.

The German Werkbund and the Dürerbund directed their branches there and the Dürerbund-Werkbund-cooperative mobilised hundreds of retailers, producers and artists to participate in a process, which aimed on high-quality, clearly designed, timeless and payable commodities for house and flat.

The Dürerbund-Werkbund-cooperative arranged their offer in the „Deutsches Warenbuch“ (here translated as: german schedule of commodities) – over 1600 articles – since 1915. A group of experts, consisting of architects and designers – those for Arts and Crafts – was composed for the guaranteed quality of all objects. The decisive factor for high quality was the design, the material and its processing. They also promoted a specially created brand, which can be still found on the bottom of some ceramics made in the tenth or twenties (cp. pitcher stoneware, Carl Mehlem for R. Merkelbach 1913, Grenzhausen, Westerwald), but also on the „Deutsches Warenbuch“ in indications and of course on the here offered signboard.

The contract for the graphic design was sent to the advertising and commercial artist Fritz Hellmuth Ehmcke. He has designed a large cooperative-G, which embraces the initials of the federation “DBWB” for Werk-Bund and the Dürer-Bund. For the name of the cooperative: „Dürerbund-Werkbund-Genossenschaft, Wertarbeit fürs deutsche Haus“ Ehmke he uses his 1914 developed “Schwabacher”, which belonged to the family of the “Fraktur”-types.

The marking of goods with a particularly high quality provides the beginning of a development, from the marking “Made in Germany“, as a seal of quality.

This marking owes its origins originally a British law, the “Merchandise Marks Act” of 1887. The purpose of this law was, to protect British consumers before illusions about the origin of the imported goods, supposedly substandard products, for example imitations, specially the so-called “substitutes”. The Dürerbund-Werkbund-cooperative had worked first time against the bad reputation of German goods. It existed until 1927 and was replaced by the publisher of the following German merchandise books, the „Deutschen Warenkunden”, edited 1939-1942 and 1955-1961.

The German Werkbund and Dürerbund managed with the founding of the Dürerbund-Werkbund-cooperative and the dissemination of the „Deutschen Warenbuch“ a highly effective potential for identification for the German people.
The pleading for commodity aesthetics, connected with moral and ethical claim was a great story of success, ready to conquer the leadership on the world market. 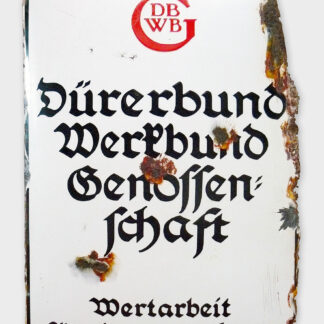