Like no other, French jewelry and glass artist René Lalique (1860-1945) was able to capture the gusto for perfume and toiletries of his time in glass. In co-operation with the established Parisian perfumer François Coty (1874-1934), who was widely known for his exclusive scents, from 1909 onwards Lalique for the first time created distinctive and aesthetically pleasing vials. His designs were able to make the scents come alive haptically as well as visually. Around 1900 perfume still was considered a fancy, and now was closely tied to a specific name as well, while coming in a small artwork of its own. Lalique’s flasks not only added to the product value, but also were a desirable accessory that was soon to be found on every society woman’s dressing table. Many more co-operations with other French perfume houses like D’Orsay, Roger & Gallet and Marcel Frank followed up to the 1930s, giving rise to additional flacon icons.

Lalique also sold costly flasks under his own brand, like the one offered here, which were supposed to be filled with one’s personal favorite scent. “Deux Fleurs”, the two three-dimensional flowers in full bloom, were designed by Lalique in September 1935. It is a design, that exemplifies the evolutionary process of subtly layering flowery scents in perfume making itself.

His groundbreaking and avant-gardist designs not only were considered a nice boxing for a deluxe product, but were regarded as a true work of art themselves. Internationally, affluent customers scrambled to get their hands on Lalique’s trendy and precious glassworks – and even so today! His flacons symbolize the essence of upper-class style of the early 20th century and are premium collectables.

Like most of his flacons, the “Deux Fleurs” were hand-made in Lalique’s 1907 patented technique of simultaneously blowing, moulding and pressing the glass, while the stopper was precisely seated. The high quality of his glass works is therefore unmistakably evident in the manufacture of the flask.

On the underside the flacon is marked “Lalique France” in etching. 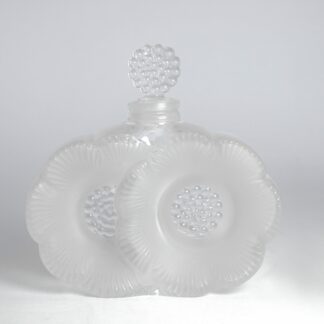