Condition: In good order. Base chipped; cuppa in perfect condition.

At the turn of the century, the long-standing manufactory paired up with Germany’s leading architects and industrial designers. From 1901 to 1903 Peter Behrens, Hans Christiansen and of course Richard Riemerschmid delivered innovative glass designs that even gave direction to the Deutscher Werkbund. Riemerschmid, who was mostly known for his works in architecture and furniture delivered a series of glass designs for Poschinger. They all were exhibited at trade fairs and exhibitions and were very positively received by the trade press. Quite the stir caused also the set “Menzel” with its distinctive design: an optically vertical blown, slightly flared cuppa that rests on a hollow shank taper. In 1901 already, Peter Behrens presented a similarly concise set with a flared shank in ruby glass at the exhibition “Ein Dokument deutscher Kunst” at House Behrens. The public, however, adjudged Behrens’s glasses as too extravagant at first.

Richard Riemerschmid (1868-1957) is one of the most influential advocates of Art Nouveau in Munich and ranks among the most important designers in early 20th century Germany. Throughout, his designs for the applied arts are very modern and future-oriented yet incorporate elements from the arts and crafts movement. 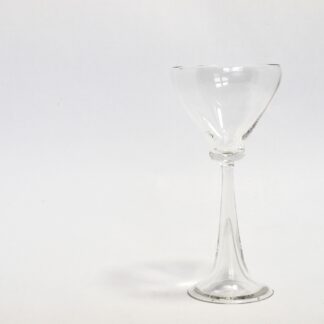