Keeper ring with diamonds and emeralds, around 1900

Condition: minimal traces of use.

No extra shipping if bank transfer selected as payment method.

Like in no other era, such diverse, symbolically rich, and constantly varied pieces of jewelry with romantic significance were produced throughout the 19th century. Symbolically charged jewelry was a particularly popular token of love. This ring is one such piece: three diamonds and two emeralds sparkle in their white and green light. In many Eastern and Western cultures, five is the number of love as the indivisible sum of the male number three and the female number two. Thus, it was also considered the number of the goddess of love, Venus.

The gemstones are arranged alternately in a row to form a half-hoop-ring. They sit in cut, platinum settings which bring out the emerald’s luminous green and the sparkle of the diamonds emphasizing it’s the delicacy. The ring shoulders are also charmingly detailed. They create a soft, flowing transition to the band, making the ring ideal to wear together with a wedding band. A substantively romantic and formally beautiful piece of jewelry that was entirely in keeping with the feminine formal language of the Belle Époque. 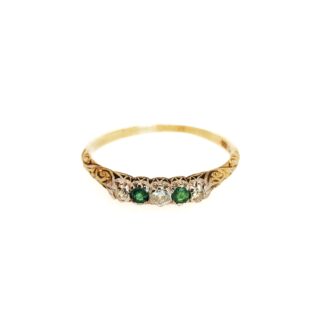