Brooch with miniature painting “The Lovers”, around 1850

No extra shipping if bank transfer selected as payment method.

The most beautiful gallant scenes in rococo costume surely were created by Jean-Antoine Watteau (1684-1721). His “fêtes galantes” composed an entire genre in 18th century painting. Usually depicted are gallant parties in dreamy park landscapes or elegantly dressed amorous couples in pastoral scenes of a rural landscape with lush vegetation. The most prominent scenes were painted in France and were often copied or charmingly restaged. Most certainly also coming from France, this miniature with the signature of an unknown painter is particularly charming and successful. The couple’s delicate, cozy bond is almost palpable and testify to the painter’s high-quality art. A refreshingly multicolored gouache on ivory, the reverse of which is in nacre, allowing it to be dated to the second rococo around 1850. The framing with scrollwork was crafted in 14 ct. gold.

The brooch is original. A precious natural pearl originally suspended from the hook that opened to the top. It was considered a gift of Venus, the goddess of sensual love, beauty, and seduction. According to ancient mythology, the pearl was the product of her doing. 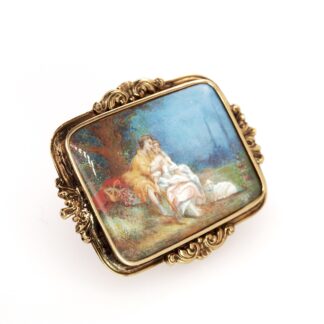