The collar necklace has nine strands of cream-colored bakelite beads, simulating ivory, connected to the gold-toned clasp with metal links (Kalotten). The clasp is composed of four rows of beads with prong settings.

Conditions: the clasp, the beads and strings are in pristine condition. Four little metal links (Kalotten) are changed (see photo).

Christian Dior was the great dictator of European and American style. His first “haute couture” collection – the “New Look” marked a sensational departure from austerity of the war-torn 1940s. Not only did it help to re-establish Paris as a centre of world fashion. It also set the tone for more prosperous decades that followed.

Unlike many of his contemporaries, who accessorized their clothing with unobtrusive “off-the-peg” jewellery for fear of it detracting from their costume, Dior designed his “Costume Jewelry” (“bijoux de couture”) as an integral part of his collections. The opulent faux pearl necklace accessorized with a black crepe cocktail dress and an Ottoman bonnet is a classic since the 50s.

Although early designs were almost exclusively couture pieces made for particular outfits or individual clients – notably the Hollywood actresses Marilyn Monroe and Bette Davis – his later pieces were produced under the licence for sale through exclusive retail outlets. These included pieces conceived in his spirit by the House of Dior over decades following his sudden death in 1957.

The coupling of the names Christian Dior and Henkel & Grosse lasted from 1955. These pieces of jewellery are stamped on a little platelet with „Christian Dior, Made in Germany“ and the year of manufacture. 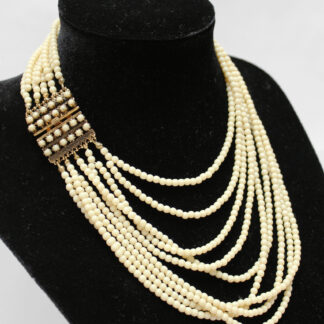