Design and decor of the jewellery are clearly in the 1920th. The draft is in a geometric manner, but not strictly, far less playful than the Art Nouveau, with clear concerted elements, the decor sets craft accents, an exotic sketching according to Egyptian hieroglyphs, as borders of the email-cloisonné, executed and processed in full precision, coloured celadon und salmon pink, which had been big in fashion at the end of the 1920th.

Comparable pieces are known in Pforzheim, Germany in the company of Gustav Braendle Theodor Fahrner Nachf.. Before 1900 Theodor Fahrner jun. realized as one of the first manufacturers for jewellery in Germany the need to renew the stylistic of the silver- and goldsmiths business. He joined the art and crafts movement and instructs freelance artists with modern drafts for jewellery. Fahrner’s artistic credo was that not the material determines the value of the piece, but the artistic design, which had to convince by the synthesis of used material and formal design. He aimed to contemporary designs of high formal and technical quality. Since 1914 he was a member of the German Werkbund and these principles, he realized very successfully.

After the takeover of the company Gustav Braendle featured new collections. The imaginative and avant-garde jewellery style of the 20s – the Art Déco – continued the tradition of the company. The reason to provide Egyptian motifs included Howard Carters discovery of the tomb of Tutanchamun in the year 1922. 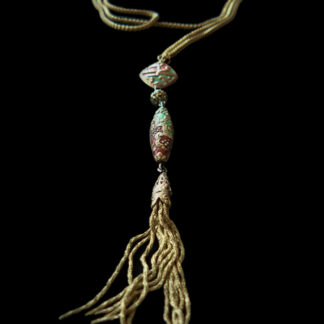