Baluster-form, ring stand, so called “Ikora”- metall, green fire patina, engraved, with fine silver inlay. Original socket, brass, chrome plated, top with two flames, newly electrified (according to the original state). Construction of the lampshade is screwed between two theadrings, switch on the shoulder of the corpus, lampshade white with structure, of the time.

Very good condition. No dents, scratches in the decoration but not in the surface of the corpus, they are part of the patina.

The general direktor der WMF Dr. Hugo Debach war an avid collector and connoisseur of far eastern objects de vertu. Even before the first world war, Debach collaborated on experimenting with Japanese techniques of platinating metal. These experiments were continued and applied in the framework of Ikora Noble Metal in the „Neue Kunstgewerbliche Abteilung“ (NKA, translated as the „New Arts and Crafts Division“) since 1927. There was something mysterious about the name „Ikora“ and the new techniques, no matter whether the high-fired patination of metall objects or the polychrome incrustination of crystal vessels was concerned. The brilliance of the colours, the richness in palette achievable by no technique employed by man, which merge and blend, ensured the Ikora products a unique status in modern arts and crafts. In the 1930s the NKA made in particular with the Ikora metal production a substantial contribution in creating “modern industrial design”, in demarcation to “traditional arts and crafts”.

The work of Prof. Paul Haustein (born 1880 Chemnitz, died 1944 Stuttgart) and the Fritz August Breuhaus de Groot and Richard Riemerschmid designs stands out in the NKA range for the high quality design. Haustein was, like Riemerschmid a member of the German Werkbund since 1907. Unlike the Breuhaus designs, his designs are notable for their decoration and the variety of techniques employed in making them as well as the consummate skill with those techniques were applied (the decorations usually represented borrowings from east Asian models). The here offered rare lamp is one of predominant designs Haustein made for the WMF in 1929.

Whereas Breuhaus and Riemerschmid spent their careers in affluent circles as a highly regarded and respected architect and interior designer, Paul Haustein worked primarily as a teacher of the decorative and applied arts at the state Kunstgewerbeschule in Stuttgart. Today he is probably best known for his activities as a member of the „Vereinigten Werkstätten für Kunst im Handwerk“ Munich and as a member of the Mathildenhöhe Darmstadt, to which he was appointed in 1903. There he showed interior decoration designs, prints and crafts pieces at the second exhibition in 1904. He also received an award for work (jewellery, small metal items) at the 1904 St. Louis World fair. In 1905 he transferred to the teaching and experimental workshops at the Kunstgewerbeschule in Stuttgart, at first as an instructor, from 1907 he was professor of metalworking there, and from 1938 until he retired in 1940, he was deputy director.

The sudden death of Hugo Debach and the outbreak of the Second World War, associated as it was with the shift to armaments production, meant the end of the Ikora Noble Metal line. With simple techniques and the range considerably reduced the production resumed in 1948. In the late 1970s production of the Ikora Metal line ceased for good at WMF AG. 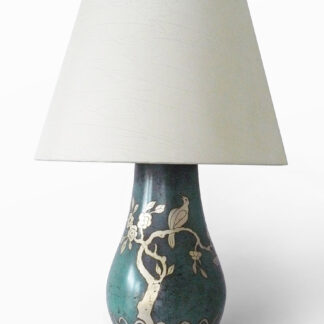