Vessel in different tones! The clay is slightly ochre and grey (for comparison, see images) and the opening for the spoon is located beside and ahead.

Condition: All in very good state of preservation. No scratches, no chips.

This vessel on three legs belongs to his early ceramic works. It has a spherical body ornamented in a pattern of offset, rounded bubbles. Riemerschmid’s designs emerged from his own experiments at the potter’s wheel, adapted age-old techniques to modern production methods; they featured solid forms derived from the properties of the material and simple patterns in traditional colors. 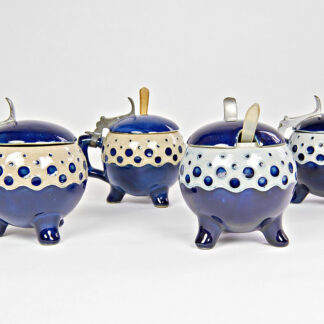