In best state, no chips, no sediments.

The „Amt Schönheit der Arbeit“ was affiliated with the „Deutschen Arbeitsfront“ (DAF), which was officially connected of the NSDAP (Nazi Party). His task was ” …to ensure that the places of work are social-hygienically, and also aesthetically treated with care” (s. Brockhaus, 1935, Bd.25). The simplicity of the designs was an integral part of national-socialist propaganda, because the rulers sought of “eternal”, “timeless” forms, with which individual currents should be avoided in the long term.

In 1935, Heinrich Löffelhardt, still little designexperienced, received the order to draft the first canteen ware „Modell Schönheit der Arbeit I“. The porcelain factory Thomas had just brought in trade the robust dining table dishes “Barb” for the “Siedlerhaushalt”, but in the eyes of the responsiblities this design already qualified Löffelhardt for this job, and in 1939 also for the second official model „Amt Schönheit der Arbeit“.

The responsibility to implement the draft was at Porzellanmanufaktur Bauscher, because Bauscher had the most experiences in this field and own the most important patents. The company produced the working pattern and mailed them to the manufacturers, which have been selected and monitored with an eagle eye by the DAF.

The approved establishments were obliged to use the patented lid and drip. A decoration of the dishes was not allowed. Allowed was just an preinstructed ringdecor and single-colour vignette
All dishes had to be marked with „Modell des Amtes Schönheit der Arbeit“. It consisted of a stylized gear with a swastika in the middle. 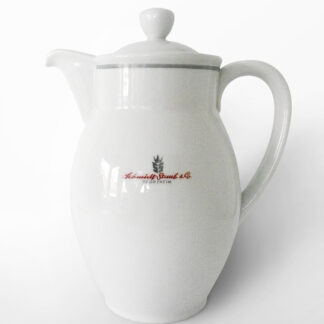