Stand lid and knob in the colour of tortoise, container marbled amber.

Condition: track at the bottom (see image), without that in perfect condition.

Already after the first World War worldwide chemists begun to work at possibilities, to produce the Bakelite in a large and bright colour range. The original one was found in 1907 by the Belgian chemist Leo Hendrik Baekeland, but his ”bakelite” just could be produced in dark tones, brown and almost black and a dark red and green.

The boom of the coloured plastics began with the development of the urea resins after 1924 and when the monopoly of the Bakelite patents ended between 1927 to 1931, the plastics industry was in a fierce urban revival. In 1930, the “American Catalin Corporation” developed an extraordinary phenolic with no fillers, which they called Catalin. The material was cast, carved, or laminated into special designs and figures. His colours shine even today as strongly as the first day. “Amber” and “butterscotch” were the most famous and most coveted tones. Rarely is the excellent imitation of the tortoise.

On top the plastic goods persuaded by their smooth and hard surfaces and the new and elegant styling. They adapted perfectly in the modern era, which was named in retrospect Art Déco. The catalin cases for powder and jewellery belong to the most stylish and desired articles in this time.

Because Baekeland brought all the key patents for producing the new resins, the naming “Bakelite” became the common word for all infusible and insoluble plastics, as well for Catalin. 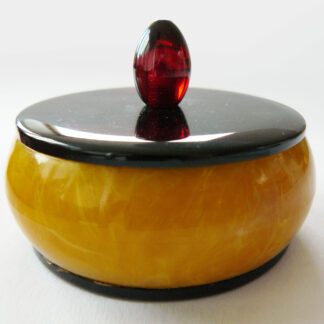