In 1924, Edmund Rossiter, a research chemist for the British Cyanides Company Ltd. (later to become British Industrial Plastics), developed a process for the condensation of Thiourea with Formaldehyde, first called beetle. The result of the process was the production of a “water-white” synthetic resin syrup. This was a major breakthrough in the development of plastics as prior to this, the phenolic resins used in the production of Bakelite had been straw coloured or brown. In 1925, processes were developed to turn this “water-white” syrup into white and pale-coloured moulding powders by combining the resin with cellulose pulp. These became known as Beetle moulding powders and were the first white ‘paper filled’ moulding powders to be produced anywhere in the world.

Bandalasta was the name given to a series of mostly mottled plastic wares was produced by the English firm, Brookes and Adams. The purity of the solours and the translucency of the material made for the unsual marbled effects and the appearance of stoney solidity. The following description was adapted from a Bandalasta sales catalogue from about 1927: “The synthetic resin was ground up with a suitable “filler,” and a dye added to produce the required colour. The requisite quantity of this powder was taken, the various colours being carefully weighed and blended by skilled workmen, the quantity being sufficient to fill the mould producing the shape required. The article was then moulded or shaped under a pressure of 2 tons to the square inch in hardened and beautifully polished steel dies, hydraulic machinery giving pressures up to some hundreds of tons being used. Heat was applied during the process that caused the resin to soften and flow. The heat and pressure was maintained for several minutes, when a chemical change took place, the resin hardened, and the article took the shape of the mould. At the end of this time the resulting piece of Bandalasta was removed from the mould and allowed to cool, and subsequent heating could not soften it again. The edges were then trimmed and the surface polished by special machinery and the result was the beautiful Bandalasta article that could not be successfully imitated by any other process.”

Because Leo Hendrk Baekeland brought all the key patents for producing the new resins, the naming “Bakelite” became the common word for all infusible and insoluble plastics. 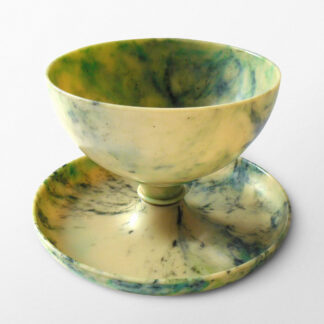