The stand consists of two parts which are mutually set.
„Bakelite“, in the type used for early American packaging and posters.

PRICE FOR SINGLE STAND!
Please name the desired colors at check out.

Already after the first World War worldwide chemists begun to work at possibilities, to produce the Bakelite in a large and bright colour range. The original one was found in 1907 by the Belgian chemist Leo Hendrik Baekeland. For the industrial production, bakelite just could be used in dark tones, brown and almost black and a dark red and green.

First the urea resin, constituted a full substitute for the original Bakelite. They were developed after 1924. Because Baekeland brought all the key patents for producing the new resins, the naming “Bakelite” became the common word for all infusible and insoluble plastics.

These stands in the shining colours red, turquoise and white were in need, when the dealers began to outfit display cabinets with new fashionable vanities of bakelite. They placed little boxes, „vanities” and „minaudières” for essential cosmetics as powder or lipstick and especially the costume jewellery.

The first creations, which included the new coloured bakelite came from France and very soon also from Germany. Especially when the boom of the coloured plastics reached America and the monopoly of the Bakelite Patents ended in the years 1927 to 1931, the plastics industry was in a fierce urban revival. The American jewellery manufacturers were outbidding each other in the 30th and 40th with unusual, artistically craftsman work, pieces, where colours were combined and layered, as well as unusual and figurativ forms. 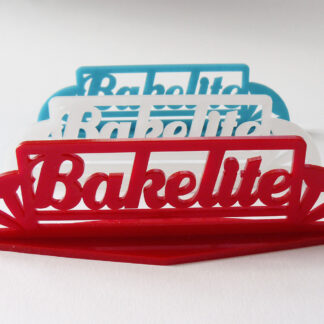