A vase of early German Art Nouveau – exceptional and rare.

Hugo Leven (1874-1956) is rightly considered one of the protagonists of the “Modern Style” in Germany. He studied at the Kunstgewerbeschule and the Kunstakademie in Düsseldorf and taught at the Hanau Drawing Academy, of which he became director. He belonged to the first generation of artists of the Deutscher Werkbund, whose contributions were presented at the most important arts and crafts exhibitions.

Engelbert Kayser also has to be considered a pioneer of German Art Nouveau. “Kayserzinn” became the trademark for the products manufactured by the Kayserzinn foundry in Krefeld-Oppum in 1895 until 1905. Within these ten years, Kayser brought out an interestingly wide range of Art Nouveau objects in collaboration with young sculptors and artists. Especially with Hugo Leven, Kayser succeeded in bringing pewter back in style and helping Art Nouveau to fame in Germany. Today, hardly any Art Nouveau collection is lacking an example of Kayserzinn products from this period.

Over the course of the 19th century, pewter had fallen into disrepute due to its lead content, but Kayser patented a high-quality variant of Britannia metal – which was called Kayserzinn. In it, the lead additive was omitted and replaced by proportions of antimony and copper. Unlike hard tin, it was now harder and thus more robust and easier to maintain, and less prone to oxidation. It had a pure, bright, matte-silver luster, which was perceived by contemporaries as an “elegant silver-gray” and thus stood out pleasantly from the cold, piercing tone of silver and could also impress in sound.

Leven’s sculpturally executed forms correspond entirely to the inherent law of the material. His irises, executed in relief as buds and full blossoms, could hardly represent the essence, the character of the blossoms more gracefully. A pictorial symbol of creativity, energy and constancy. If you are given an iris as a gift, it shows that the person who gave you the flower is faithful to you!

On the underside the vase is marked by the company name and model number “KAYSERZINN 4079”. The model can be found in the manual of the Kayser company from 1897 with the designation “Vase mit Schwertlilien”. 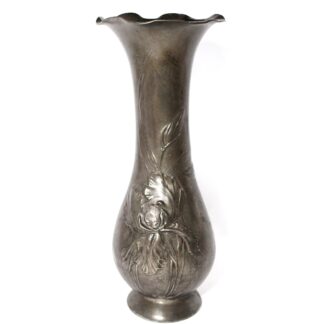