After the end of the second world war the Burg Giebichenstein was one of the first art schools in the Soviet occupation zone, which were likely to be reopened – already in October 1945. In the context of the evolving state and the higher education policy, the Burg Giebichenstein was restructuring to the „Hochschule für industrielle Formgestaltung Halle-Burg Giebichenstein“, which enclosed an own „Institut für Entwurf und Entwicklung“ (translated here: for design and development). Until the beginning of the 1960s the first items for household made of plastic were designed some, especially from the new synthetic resin „Meladur“ – the GDR-brand name for melamine.

The trigger for the development of new designs for consumer products made of plastic was the “chemistry program” from 1958, that Walter Ulbricht dictated the chemical industry. The chemistry should bring the expected prosperity and the beauty in the apartments of the GDR.

Tableware and household appliances of metal and porcelain had to be replaced by new materials, which should change the consumer behaviour completely.
“Meladur” could be used as an odourless, tasteless, water- and solvent resistent, particularly stable, boilable material, which could enable completely new applications, especially those in connection with the use of food.

The here offered cups are among the first basic shapes, which Martin Kelm developed, when he was a docent for Design and an employee of the mentioned institute (1959-1962). He designed the cups for a camping and canteen crockery in various modern pastel colours.

For his designs he found favour models in the porcelain industry, where the liquid slip – like the resin – was cast in forms, which attributed on designs of the 1930s, or even of the turn of the century. Kelm designs show clear parallels to Jutta Sikas famous breakfast crockery from 1901/02 for the porcelain manufacture Vienna.

Unlike his colleagues, who pushed forward the design for radios, TVs, locomotives, shavers, cutlery and typewriters for example, Martin Kelm suggested a very special career.

He used personal connections in the party, which helped him within a few years to arise from a designer to the central director for design of the EastGerman Republic.

In 1971, he published the first comprehensive scripture to the design process in the GDR: „Produktgestaltung im Sozialismus“. 1972 he rose to the head of the newly created “Amt für industrielle Formgestaltung (AIF)” (translated here: office for industrial design) and later to the secretary of the government. He was one of the first persons to whom the award „Designpreis der DDR“ was given. 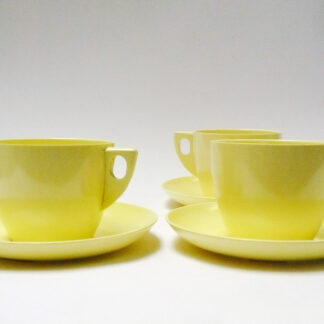