In the course of the 19th century, billiards increased in popularity especially in the US and in Europe. Pool halls or, as they are since called in Vienna, pool cafés soon became a popular social hot spot, not only to play billiards but also as a place to see and be seen.

Michael Phelan (1817-1871) was the first to open such a hall on New York Broadway in 1847. He passionately played the game himself and advocated for the standardization of the rules as well as its equipment throughout the 1850s, which very much varied for example in the size of pool tables or the number of balls in play from hall to hall. Especially the size of the balls differed heavily, which is still resembled by the different diameters of billiard balls, that are used depending on the size of the table or the game today.

Traditionally, billiard balls were made from ivory. From the early 20th century onwards, however, bakelite and galalith proved a better alternative due to their enhanced bouncing qualities and quickly replaced ivory within only a few years. Galalith is a semi-synthetic material which primarily is made from casein and was firstly developed by German scientists Wilhelm Krische and Adolf Spittler in in 1885. From 1904 onwards, galalith was then industrially used. 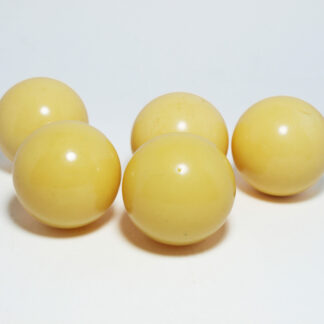