Adelbert Niemeyer was a leading representative of the applied arts movement in Munich during the Jugendstil period. He studied painting at the Düsseldorf academie of fine arts from 1883-1888, when he moved to Munich, where he continued his studies under Friedrich Fehr, having failed to gain admission to the academy. He was subsequently a student of the académie Julian in Paris and a pupil of Benjamin Constant in Paris. In 1892 he was one of the founders of the Munich Secession, the first artists association in Europe, against the unpopular academicism.
At that time the solution of the stylistic problems have been seen in the arts and crafts, what prompted a number of excellent talents, like Richard Riemerschmid, Peter Behrens, Bruno Paul und Albinmüller for example, to go from the fine arts in this area. In 1902 Niemeyer founded the „Werkstätten für Wohnungseinrichtungen“ in Munich, in partnership with the upholsterer Karl Bertsch, and the painter Willy von Beckerath which merged with the Deutschen Werkstätten in 1907.

From 1907 on he taught at the Kunstgewerbeschule Munich (later: Staatsschule für angewandte Kunst). He was a co-founder of the Deutsche Werkbund in 1907. He worked for the most forward-looking entrepreneurs of the time: the porclainmanufacturer Nymphenburg, die porclainmanufacturer Meissen, for Villeroy & Boch, also for Poschinger, Oberzwieselau, Richard Merkelbach, Höhr-Grenzhausen, and for the Schwarzburger Werkstätten for porelainart in Unterweißbach. Niemeyer remained until his death a tireless designer.

Since 1908 the Schwarzburger Werkstätten for porelainart were directed by the engineer Max Adolf Pfeiffer until he moved to the famous royal porcelain factory Meissen in 1913. Pfeiffer was a member of the Deutsche Werkbund and an advocat of this quality standards from the beginning on.

In 1915 the Dürerbund and the Deutsche Werkbund edited the „Deutsche Warenbuch“, to demonstrate the world quality “made in Germany”, with functional and objectively crafted commodities. The catalog contained also Niemeyers drafts for the royal-bavarian porclainmanufacturer Nymphenburg, the Schwarzburger Werkstätten and for Villeroy & Boch. So the here offered piece.

Niemeyers persuasive draft is at the end of a sequence of inkstands for at first Nymphenburg, than the Keramischen Werkstätten Herrsching and the Karlsruher Majolika-manufacturer and finally for the Schwarzburger Werkstätten.

The generous, symmetrical balanced design includes an oval dish and a fixed ink-pot. The shell has an upswept border, an ink-pot in the form of a cuppa with extended lip, helmet lid and a high loop as knob, whose edges are adorned by an abstract blossom decor: a clear, organic-acting design, whose symmetries and directness not end in itself. 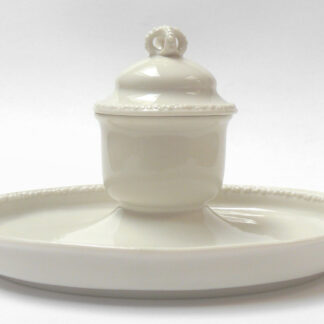