Condition: In very good state of preservation. No chips, no scratsches.

Richard Riemerschmid was an important artist of the German arts-and-crafts-movement, the so-called Munich Art Nouveau. He was born in Munich, 1868, died ibidem, 1957, architect, designer for furnishing, textile, ceramic, glas and silverware a.s., founding member of the „Vereinigten Werkstätten für Kunst im Handwerk“ (“United Workshops for arts in crafts”), in Munich (1897) and the „German Werkbund“ (1907), in 1908 creator of the first garden city in Germany, in Hellerau/Dresden, which was implemented in the course of establishing the “Deutsche Werkstätten“ (formerly „Dresdner Werkstätten für Handwerkskunst“). 1912–1924 he was the head of the “Kunstgewerbeschule” in Munich, and a member of the jury of the „Deutsches Warenbuch“, edited by the German Werkbund and Dürerbund in 1915, the structural and artistic director of the “German Country Fair Munich” 1922 and between 1926 and 1931 professor und director of the “Kölner Werkschulen”. Riemerschmid was influenced by the English Arts-and-Crafts-movement und designed furniture and utensils of almost all materials.
At the beginning of his ceramic work Riemerschmid dealt exclusively and intensively with the material stoneware in cooperation with the traditional industries of the Westerwald, especially with Reinhold Merkelbach in Höhr-Grenzhausen. Riemerschmid designs contributed substantially to lead them out from their economic plight and to participate them in the Modern Movement.

The so called „bowl for milk” is part of a group of pieces, which had been summarized with the model number “1730” in the year 1905.

To the series belonged the mustard pot with pewter (1902), which became a model for other pieces, produced from Reinhold Merkelbach, like the butter dish, the salt bowl, the dish and egg cup. Originally the „bowl for milk“ belonged to a group of fruit bowls, which Riemerschmid designed in 1904 and which was offered in the first year with the model no. “1855”. From 1905 on, the bowl referred to the series “1730”. It was Like all the other parts of the series, this on was produced as glazed porcelain stoneware and originally only in the dimensions given here. A slightly higher model came out only in the 1940s.

Be the first to review “Bowl for milk, Richard Riemerschmid, 1904, for Reinhold Merkelbach, Westerwald” Cancel reply 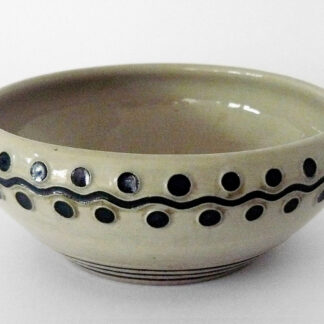