Condition: in all good, repaired piece on the knop, chip inside, not visible outside.

The “Steingutfabrik Velten-Vordamm” was one of the liveliest and most versatile establishments of his time. The head Dr. Hermann Harkort was technically-scientifically ambitious and had set up its own laboratory in Velten, in order to research the properties and technology of the stoneware first and faience forward.

In 1922, the ceramic workshop of the Bauhaus contacted Harkort and for his part Harkort found at the Bauhaus rudimentary realized, what he campaigned – namely to win the artist for the industry.

In fact, the Steingutfabrik Velten-Vordamm became the first company that cooperated with the Bauhaus. Harkort, Walter Gropius and Gerhard Marcks have been in contact since years. In 1924 Theodor Bogler took over the direction of the artistsatelier in Velten and next to him worked Luise Harkort, Else Dörr und Antonie Mutter.

From here came henceforth the shapes and designs, which brought in future the decisive impulses for the total production. With Bogler, Harkort succeeded to bind a substantial part of the creative potential of Bauhaus-pottery to his factory.

The artistic career of Luise Harkort, born De Laporte (1886 New York – 1966 Erlangen), began also in 1924 and ended with the closure of the company in the year 1931. At the beginning she sculpted flowers- and leaves-still lifes from clay with illuminating vitrifiable overlay.

There were compositions of rare originality, reminding to the faience images of the 18th century. According to the earthenware, there have been created unique items also in the faience -technique and also it was a question of connecting art, craft and technology.

The so-called “unique-faiences” were manufactured and marked by the artist themselves and were produced in ever new variations by the artist. Luise Harkort created service, vases, bowls and cans with a high artistic sensitivity.

After 1925/26 the influence of Theodor Boglers is clear: stricter forms and monochrome, sometimes flowing glazes, stripes and geometric decors. The here offered can provides a rare example.

Be the first to review “Can, faience, Theodor Bogler, Steingutfabrik Velten, 1928” Cancel reply 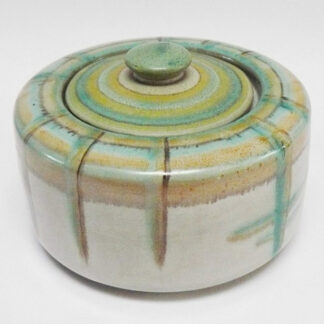