In perfect state. No chips, no scratching.

Wilhelm Wagenfeld is one of the most important pioneers of German industrial design. He was a student of the Bauhaus in Weimar. Since the 1930s to 1970s of the 20th century he worked for the major German industries for glass, ceramics, metal and plastic.

As a member of the German Werkbund he defended his whole life the design of the so-called “good form” in the meaning of high quality design. In his own, almost scientific approach Wagenfeld rethought his designs always again. His drafts gave an excellent insight into the history of influence of modern design.

In the first years of the economic rebirth in post-war Germany, Wagenfeld’s glass designs for the “Vereinigten Lausitzer Glaswerke“ VLG, became models for the whole German glass industry.

In the beginning of the 50th some glass companies, like Rosenthal, Peill & Putzler and the Württembergische Metallwarenfabrik WMF, commissioned Wagenfeld to draw a series of opulent drinking glasses, those with the heavy foot.

With the here offered set of glasses, Wagenfeld came back to a new type of drinking glass, which he already designed for the VLG. The formally new of this glass type was the attempt to give up the classic three-division of foot, handle and cup, which fulfils the griffin and stand-function simultaneously and was in favour of the technically simpler massive foot.

In 1951 the Rosenthal AG in Selb entrusted Wagenfeld to design a set made of heavy crystal glass. In contrast to Wagenfeld’s elaborately grinded glass named „Reichenhall“ for the VLG, he designed a glas whose cup stayed smooth and whose foot was shaped by five, wide and flat cuts. Foot and cup were clearly separated from each other. In the series of all Wagenfeld “footglasses” this one is the most modern.

Unfortunately the company modified this glass in later years with six and even ten cuts in the foot. Wagenfeld’s design and as well the modifications of Rosenthal were named “Patricia”.

The here offered set shows the original rare design of Wagenfeld with just five cuts in the foot! In the year 1952 Peill & Putzer commissioned Wagenfeld with a set of this type of glass, too. This glass revealed cuts all over again.

Be the first to review “Set of glass „Patricia“, Wilhelm Wagenfeld, 1952/53, for Rosenthal, Germany” Cancel reply 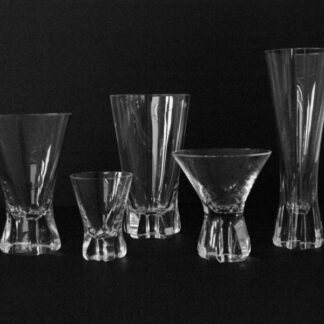