Since the end of 1910 „Jenaer Glas“ produced utilitarian borosilicate glasses  for household according to the model of the American “Pyrex” from Corning Glass Works.
The first factory designs for glass had awakened the interest of Walter Gropius at the Bauhaus in Weimar, and then they were issued for the students and discussed. In this context, the Bauhaus attracted the attention of Erich Schott on needed improvements and from 1925 on there was a successful collaboration with artists of the Bauhaus.
The beginning of the redesign of the Jenaer glasses was the draft of the Sintrax coffee-machine by Gerhard Marcks in 1925. Between 1931 and 1935 further 23 drafts were followed by Wilhelm Wagenfeld, beneath the here offered „Soser“. In his designs, Wagenfeld put great value on a high degree of functionality and the transparent aesthetics. A special mark of Wagenfeld was the squeezed handles, bent this way that you don’t come in touch with the hot wall. 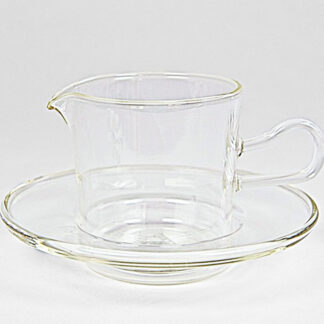