Marked: on the underside, incised

This small and thick-walled vase was manufactured by glass foundry Strömberg in Småland, Sweden,which was founded in 1876, then known as Lindefors Glasbruk. Since 1933 the factory was named after the new owner Edvard Strömberg. The foundry employed renowned Swedish glass designers of the 20. century like Gunnar Nylund and Runee Strand, who added to the prominence of the company in the 1960s. After financial troubles in the early 1970s, the foundry was closed in 1979.

The cut-glass vase is multiply overlaid and on the obverse side a small gazelle was elaborately cut into the surface. A masterful and precise work – the glass cutter managed to capture a lively glance of the graceful animal.

The piece is in very good condition. On the underside it is marked with an incised inscription, which also indicates the model number. Following the design and the subject, this vase dates back to the last years of the factory’s production in the 1970s. 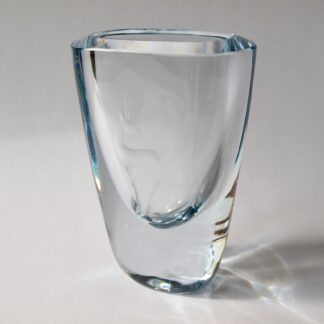