Age: 2. half of the 19thcentury till 20thcentury

Condition: fully functional, yet according to age.

This illustrious set of fourteen stoppers and a screw definitely supplies entertainment at any dinner party! Apart from their decorative point, seven of the “Mandl” cause the stir through crafty refinement: With cords and levers the figurines play tricks and funny faces – and one or the other picks up the beer mug themselves. Everybody of the troop caters to a very specific character trade – monk, two drunkards and a figurehead are amongst them.

Stoppers like these were popular souvenirs for tourists in Tyrol or southern Germany. Accordingly, one of the “Mandl” can be traced back to Tyrolese saltwater spa Hall – his background is shown on the brim of his green hat. The sassy pair descents from the Ziller Valley.

Some of the toppers were handcrafted and -colored in the late 19th century. Two of them still feature the original cork. The other figures were manufactured in the first half of the 20thcentury, with the exception of the guy wearing a base cap. Two “Mandl” are lacking corks. However, they are easily replaced. 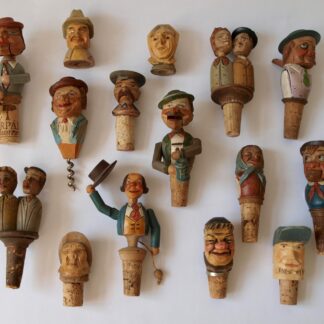