Holy Sebastian perforated of arrows, bonded to a tree, drapted waistcloth around the hip, on a naturalistic base, carved, lindenwood, old original setting Fassung, Southern German, around 1800.

State: age-related chips at the polychrome setting. Underneath the trunk a piece oft he base is canceled, which is not visible in the frontal view.  (s.im.)

The figure hast he original polychrome setting. The setting of the holes where the arrows entranced were jumped off partially. The simple shaping and wording of the figure proves the sculpture as a popular, unprofessional, rural engraving. Trunk and base interlink by a simple plug connector.

Saint Sebastian (born c. 288) was an early Christian saint and martyr. He was killed during the Roman emperor Diocletian’s persecution of Christians. He is commonly depicted in art and literature tied to a post or tree and shot with arrows. Despite this being the most common artistic depiction of Sebastian, he was, according to legend, rescued and healed. 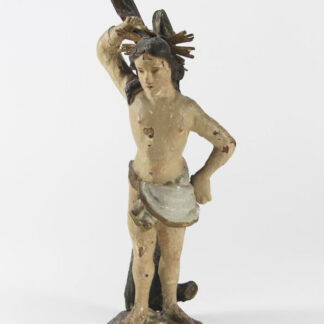