String with evenly and consistently-sized venetian cystalbeads in the style of Rezzonico argento, transparent with silver foil, alternating black beads, in spiral and rhombus, tasselled.

The way of knotting the sautoir came originally from India and at the end of the 19th century /early 20th century it was brought to Europe.

In the second decade of the 20th century, the public thirsted for anything new, modern and interesting in any way.

The legendary Paris Art Déco exhibition in 1925 introduced geometric and cubist forms to the applied arts, exerting a strong influence on clothing, hairstyles and jewellery.
The feminine ideal was the pert but giddy young thing, the flapper or garçonne, so called after the bestseller by Victor Margueritte, published in 1922. The fashion of the time decreed the tall, slender feminine silhouette. Matching the “slim line” long sautoirs have been en vogue with long chemise dresses.

Be the first to review “Sautoir with tassel, Art Déco, 1920s” Cancel reply 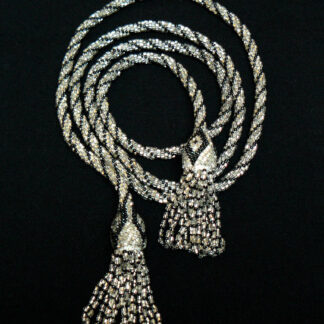