The “peacock chair” can’t be assigned to a specific designer, but it belongs unequivocally to the most famous chairs of the seventies. As accessory for fashion shoots and movie stages he advanced to a throne of pop culture.

In the end of the 19th century the industrialization had made wicker furniture affordable for “Everyone”. With new machines and techniques they were produced faster and more cost-effective.

In the 1960s they have experienced a renaissance within the meaning of “Good Design”. The wickerwork brought harmony and cosiness in the households and the sweeping draft with its delicate tubular steel feets issued the modernity in his archaic sense.

Even though in the 1970s design was a truly international phenomenon, consumers were thus largely fashion consious rather than design conscious. Manufacturers felt compelled to bring out new prototypes, annually to sate this seemingly never-ending appetite for the grooviest, coolest and hippest products. This search for the “new” also brought Far-East-inspired drafts into interior design. The here offered chair with an fan-like back of a beautiful peacock became a true style icon during the 1970s. 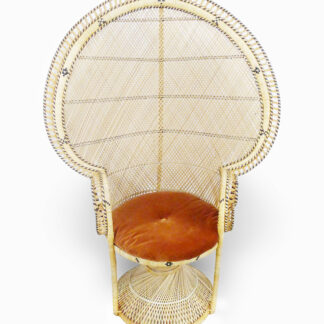